One of the most surprising things to me over the past few months has been just how much I didn’t understand who Jesus really was.  Someone who’s been in church religiously for 22 years (even teaching for much of that time) surely ought to have a pretty good grasp of who the Bible says Jesus is, right?  I didn’t, though, not by a long shot, and Anne Rice announcing that she is leaving Christianity tells me that there are lots more like me.  (More on that in a minute.)

One of the main areas where I labored under false assumptions was in how Jesus responded to different types of people he came into contact with.  They largely seem to fall into one of three categories.

These were people who had little or nothing to do with the church, either because of conditions beyond their control (disease, nationality, etc.) or because they had chosen to go their own way.  Jesus never spoke harshly to these people, and only occasionally did he speak to correcting their behavior.  Instead he spent time with them, loved them and met their needs — so much so that those inside the church derisively called him a “friend of sinners“:

“To what can I compare the people of this generation?” Jesus asked.  “How can I describe them?  They are like children playing a game in the public square.  They complain to their friends,

For John the Baptist didn’t spend his time eating bread or drinking wine, and you say, ‘He’s possessed by a demon.’  The Son of Man, on the other hand, feasts and drinks, and you say, ‘He’s a glutton and a drunkard, and a friend of tax collectors and other sinners!’  But wisdom is shown to be right by the lives of those who follow it.”

Those born into Judaism or who adopted it later in life knew enough of God and the Law to know what was expected of them.  Jesus often spoke to these people like an exasperated father speaks to his children.

Jesus saved his harshest criticism for the religious leaders of the day.  Reading through the stories of Jesus describes a person much different than the one I thought I knew.

Opposition to the Religious Leaders

Jesus constantly found himself in conflict with the leaders of the church.

Jesus never shied away from conflict with the religious leaders.  In fact, there were times when he intentionally pursued it:

On another Sabbath day, a man with a deformed right hand was in the synagogue while Jesus was teaching.  The teachers of religious law and the Pharisees watched Jesus closely.  If he healed the man’s hand, they planned to accuse him of working on the Sabbath.

But Jesus knew their thoughts. He said to the man with the deformed hand, “Come and stand in front of everyone.”  So the man came forward.  Then Jesus said to his critics, “I have a question for you. Does the law permit good deeds on the Sabbath, or is it a day for doing evil? Is this a day to save life or to destroy it?”

He looked around at them one by one and then said to the man, “Hold out your hand.”  So the man held out his hand, and it was restored!  At this, the enemies of Jesus were wild with rage and began to discuss what to do with him.

Jesus was very open about how he felt about the religious leaders:

Then, with the crowds listening, he turned to his disciples and said, “Beware of these teachers of religious law!  For they like to parade around in flowing robes and love to receive respectful greetings as they walk in the marketplaces.  And how they love the seats of honor in the synagogues and the head table at banquets.  Yet they shamelessly cheat widows out of their property and then pretend to be pious by making long prayers in public. Because of this, they will be severely punished.”

But he never shied away from criticizing them personally, either.  The Bible includes multiple instances:

One of the Pharisees asked Jesus to have dinner with him, so Jesus went to his home and sat down to eat.  When a certain immoral woman from that city heard he was eating there, she brought a beautiful alabaster jar filled with expensive perfume.  Then she knelt behind him at his feet, weeping.  Her tears fell on his feet, and she wiped them off with her hair.  Then she kept kissing his feet and putting perfume on them.

When the Pharisee who had invited him saw this, he said to himself, “If this man were a prophet, he would know what kind of woman is touching him. She’s a sinner!”

Then Jesus answered his thoughts. “Simon,” he said to the Pharisee, “I have something to say to you.”

Then Jesus told him this story: “A man loaned money to two people—500 pieces of silver to one and 50 pieces to the other.  But neither of them could repay him, so he kindly forgave them both, canceling their debts. Who do you suppose loved him more after that?”

Simon answered, “I suppose the one for whom he canceled the larger debt.”

“That’s right,” Jesus said.  Then he turned to the woman and said to Simon, “Look at this woman kneeling here. When I entered your home, you didn’t offer me water to wash the dust from my feet, but she has washed them with her tears and wiped them with her hair.  You didn’t greet me with a kiss, but from the time I first came in, she has not stopped kissing my feet.  You neglected the courtesy of olive oil to anoint my head, but she has anointed my feet with rare perfume.

“I tell you, her sins—and they are many—have been forgiven, so she has shown me much love. But a person who is forgiven little shows only little love.”  Then Jesus said to the woman, “Your sins are forgiven.”

As Jesus was speaking, one of the Pharisees invited him home for a meal. So he went in and took his place at the table.  His host was amazed to see that he sat down to eat without first performing the hand-washing ceremony required by Jewish custom.  Then the Lord said to him, “You Pharisees are so careful to clean the outside of the cup and the dish, but inside you are filthy—full of greed and wickedness!  Fools! Didn’t God make the inside as well as the outside?  So clean the inside by giving gifts to the poor, and you will be clean all over.

“What sorrow awaits you Pharisees!  For you are careful to tithe even the tiniest income from your herb gardens, but you ignore justice and the love of God.  You should tithe, yes, but do not neglect the more important things.

“What sorrow awaits you Pharisees!  For you love to sit in the seats of honor in the synagogues and receive respectful greetings as you walk in the marketplaces.  Yes, what sorrow awaits you! For you are like hidden graves in a field.  People walk over them without knowing the corruption they are stepping on.”

“Teacher,” said an expert in religious law, “you have insulted us, too, in what you just said.”

“Yes,” said Jesus, “what sorrow also awaits you experts in religious law!  For you crush people with unbearable religious demands, and you never lift a finger to ease the burden. …  You remove the key to knowledge from the people. You don’t enter the Kingdom yourselves, and you prevent others from entering.”

It was nearly time for the Jewish Passover celebration, so Jesus went to Jerusalem.  In the Temple area he saw merchants selling cattle, sheep, and doves for sacrifices; he also saw dealers at tables exchanging foreign money.  Jesus made a whip from some ropes and chased them all out of the Temple.  He drove out the sheep and cattle, scattered the money changers’ coins over the floor, and turned over their tables.  Then, going over to the people who sold doves, he told them, “Get these things out of here. Stop turning my Father’s house into a marketplace!” 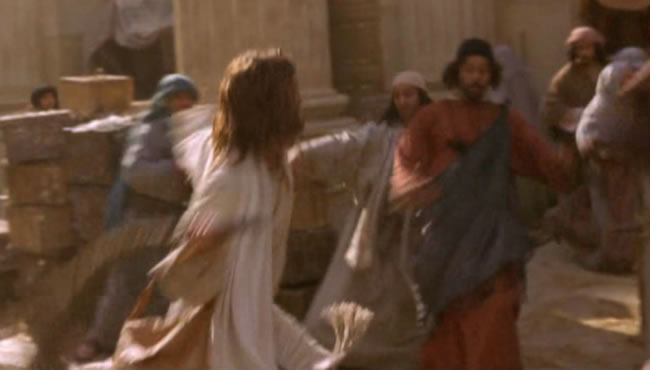 This was Jesus “mean and wild,” a Jesus I had never thought much about.

The religious leaders ultimately got their way, but only because Jesus allowed them to:

Then Jesus spoke to the leading priests, the captains of the Temple guard, and the elders who had come for him.  “Am I some dangerous revolutionary,” he asked, “that you come with swords and clubs to arrest me?  Why didn’t you arrest me in the Temple?  I was there every day.  But this is your moment, the time when the power of darkness reigns.”

The church in that day had been waiting hundreds of years for their Messiah; they rightly expected him to show up any minute.  So why did they kill him when he finally arrived?  They didn’t know it was him:

He came into the very world he created, but the world didn’t recognize him.  He came to his own people, and even they rejected him.

Religion always kills Jesus — slowly, subtly, methodically — until eventually what we call Christianity bears little resemblance to the one it is supposed to represent.

seem seem to to
Filed under Spirituality